Bullion Shark is a company that sells gold, silver, and numismatic rarities online. They are a family-owned business with a wide selection of products. But how do they compare to the competition? And are they actually legitimate?

See if Bullion Shark made our list this year by checking our updated list of top 5 precious metals investment companies above! 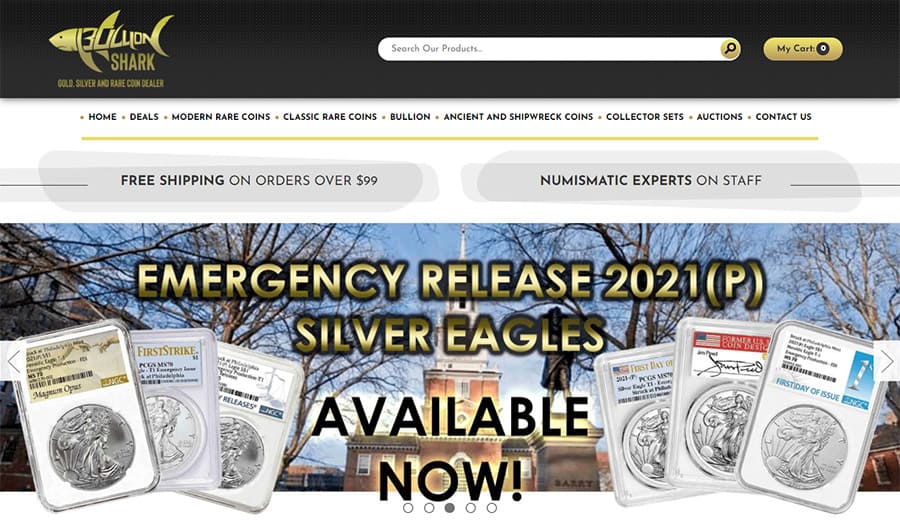 The company has a large array of different products available to buy online. In addition to gold and silver coins, they also sell rare coins and collector sets. Some of the categories for online shoppers include:

The company seems to focus more on collectibles than on pure bullion. They have numismatic experts on their staff, who can explain the process for buying and selling collectible coins.

Collectible coins can't be used in a self-directed IRA. The company seems to have limited items that can be purchased for use in an IRA, and they also don't seem to have any robust IRA services.

Their way of selling collectible coins is somewhat worrying. They say that collectibles have the potential to grow over time, which is true. But they downplay the riskiness of the investment. In addition, it's possible that they mark their collectible coins up to far more than their purchase price.

With all of that said, they do appear to be a legitimate company with legitimate offerings. So let's investigate what the Better Business Bureau and past customers have to say about the company's dealings.

Is Bullion Shark a Scam? 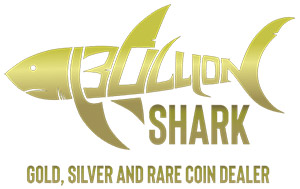 Bullion Shark is a legitimate business. They have been accredited with the Better Business Bureau since 2017 and hold an A+ rating. Of the 22 customer reviews on the BBB website, the company has an average of 4.27 out of 5 stars.

There have been two complaints closed with the BBB in the past three years, but none in the past twelve months.

Unfortunately, there are also some very concerning consumer reviews through some websites. Let's take a look at the complaints people have had.

One of the Better Business Bureau complaints was lodged in 2020. The person stated that when their coin sets arrived, the boxes were damaged and the coins were out of place. This led to a reduction in value.

The person made an effort to contact the company. When they called about the issue, the customer service representative refused to help them, saying that the phones were only for sales. The customer was told to email instead.

The customer did indicate that the matter had been resolved, but there isn't a public record of how the company responded. While this is a little odd, it isn't necessarily a red flag. Sometimes reviews and responses are removed from the BBB website when they cease to be relevant to the business.

Similarly, the second complaint is not displayed on the BBB website. But we do know it was related to an issue with a product.

The third party website US Reviews has many complaints recorded against this company. The customer service team has an average of 2 out of 5 stars. Pricing has 2.6 stars, ordering has 3.2 stars, and delivery has 3.2 stars. These are abysmal ratings that indicate you won't get good service or fair pricing.

One customer said they have had repeated problems with the company. After winning an auction, they were sent the wrong coin. The customer mailed the coin back and paid for the shipping to do so. The company then sent an ungraded coin.

This same customer later had the winning bid on five coins being sold through the auction site. Instead of being sent them immediately, the customer had to email and call the company. They were told that the coins would be sent by priority mail. As of writing, they hadn't yet received them.

Another customer said that they made a purchase because of the excellent pricing. The company accepted the money but then didn't follow up with any information about the order. The customer couldn't even get an estimated delivery date. They said that people should avoid working with this company.

Yet another individual said that not only would they not shop with the company again, but they regretted ever doing so in the first place. Apparently they became the repeated target of aggressive spam calls and sales pitches. The customer said people should never give the company their personal information.

One customer said he never received his metals and that people should avoid the company. He never followed up with any information about whether the issue was resolved, and the company has not responded.

There is a particularly detailed complaint written by a woman named Annette. She says that she made a purchase and waited for a month to hear anything about it. Finally, the company emailed saying that there were limits to what they could ship to Minnesota.

The customer was confused about why the order was accepted at all, as well as why it took so long to get a response. She spoke to a representative who asked if there was someone in another state that the company could ship to. The customer said she'd get back to them.

Once she called back, the company said they could ship the order to the customer's sister in a different state. They asked to redo the entire order over the phone, even though the customer wanted to purchase exactly what she had several weeks before.

The customer was frustrated that the company wouldn't simply remake her original order, and she was also upset that it took a month to find out her order couldn't be shipped. She was left extremely unsatisfied by the customer service team.

One customer stated that after purchasing a coin, the company undercut the price he paid by 50 percent. He stated that the order and delivery process was good, but that the customer service and pricing were horrible.

Bullion Shark actually did respond to this review. They said that the customer was complaining about two different coins. The one he bought was issued in 2020, and the cheaper coin was issued in 2021. Since they were different products, there was no reason to complain about the coins.

It is odd that Bullion Shark has chosen to respond to one of the complaints, but they haven't made any effort to address many others. Maybe they don't have any way to defend themselves against the complaints about poor customer service.

All in all, Bullion Shark has far too many complaints and negative reviews to be considered trustworthy. In addition to reporting issues with packaging and mishandled orders, people consistently say they have encountered poor customer service.

If you make an order, you might have to wait weeks for it to ship -- if it ships at all. Some complainants stated that they never received their metals at all, and the company made no effort to fix the issue.

It's better to work with a company that has more positive customer reviews. That way, you know that you're getting what you pay for.

Although we think that overall Bullion Shark is a decent company, we believe that there are better companies out there to make your investment with.

Or, continue with Bullion Shark...